perfect medium versus imperfect memory, digital modeling best suited to platonic ideals and not real objects, but these objects aren't real anymore and neither are the people who used them, my memory of my grandmother indistinguishable from my idea of grandmother, what she represented and not what she was, the frustration of needing to give exact details when all I remember are vague impressions, a memory of a memory of a feeling— 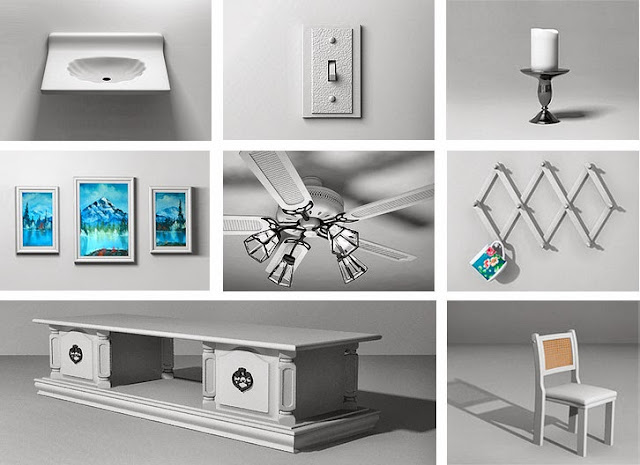 Where I left off:  I think I was working on a refrigerator.

What needs to happen:  We've upgraded our version of 3D Studio Max twice since I last used it.  I need to watch some tutorials.  There have been big improvements in using normal maps on low-poly surfaces to create details, and adding chamfers as part of the rendering process rather than the modeling process.  In theory I think I ought to teach myself Blender, because then I can work at home.  (That is, if the current version of Blender will run on my old, old, Mac OS.)  But learning Blender is so awkward.  I know that it isn't, actually, limited.  I've seen the Blender galleries.  But because I'm so used to Max, even after years of not modeling anything, that anything else seems like it can't possibly be as good.

I write messages at two-thirty in the morning, half-drunk with exhaustion, and half-drunk with drink, giddy and hopeful. I write them when I wake up, and in the minutes before work or class.   I mull them over for hours or days, typing and retyping the same sentence.  I write them carelessly, thoughtlessly, almost on accident.   I trip and they fall out of my hands.  My computer screen is the first thing I see in the morning when I wake up, and the last thing I see before I sleep.  I keep writing because I can’t imagine not writing. I need the waiting, and the hoping, and the wanting.   I don’t know what to do with myself without it.

Where I left off:  I was going to film this with live action scenes, but only because I wanted to learn to shoot and edit video since we had cameras that could do it.  I made a mock-up, and never actually shot any footage.

What needs to happen:  The thing is, there's something really cheesy about dramatic re-enactments, and I'm not that great an actor, and I don't want to look at myself that much.  Animation, or freeze-frame sketches, or anything else, would actually fit the essay much better.  I need to learn to animate, to see if that's the way I want to do this, and I should also look into different drawing techniques/styles.  I'm thinking of shooting photos of the scenes, and working from them, maybe directly on them.  Sort of the way I sometimes trace photos to make line drawings for illustrations for this blog.

I might see if I can audit the animation class next semester...

Where I left off:  I got sooooo close to finishing another year of State Fair photos, but not quite enough to add them to the preexisting set.

What needs to happen:  Lay out all my prints, and see which need tweaking.  Each image has a print I'm happy with, by itself, but sometimes they need adjustment when put together as a group.  Then, possibly a little more editing out of weaker images.  If I rebuild my website, I'll need to update the series.  Seriously, there is no excuse.  It's soooooo close.

Tagged: 3D, art, I made this, photography, video