because I get angry at knitting forums

A says: I can't learn charts! I'm a written directions person, not a map person! Don't you know that there are different kinds of learners? I can't do it. That's it.

B says: Charts are easy! You just haven't tried. Once you do, you'll realize that they're easier and better.

to B: "Easy" is never an absolute, inherent, quality of something. YOU find it easy. That's nice for you. But it is incredibly ignorant and condescending to assume that anyone who finds reading charts difficult is "just not trying." Just because someone CAN do something doesn't mean they will ever find it easy, fun, or practical.
at 1:09 PM No comments:

This one only sort of counts, because 1) he "saved" me and let me know, and 2) he's in an LTR already

I am smart. I am nice. I am talented and skilled (not the same thing). I have a good smile, and I smile a lot. I'm an awesome kisser. I have references. I have sexy legs. I am fair. I am open-minded. I am thoughtful. I set long-term goals and achieve them. I make spontaneous decisions and enjoy them. I've visited twelve countries on two continents outside of the US, and 22 States, not counting the ones I just drove through (New Jersey, I'm looking at you!) I saw Gladiator in the theater, in Rome. I've packed up and moved, by myself, 2700 miles away, and made friends when I got there. I've never lived anywhere twice. I've been published in a highly respected journal, I've gotten first place in a national photography contest. I'm on jstor. I have two master's degrees (okay, that's kind of a technicality) and a job in my field. I am easy to please and hard to offend. I've eaten weird things. I've had weird jobs. I have stood in front of hundreds of people and showed them the things I hated most about myself. I am eccentric. I am unusual. I can make people laugh. I have a great speaking voice. I am a deconstructionist, a post-post-modernist, and a sex-positive feminist. I'm good with my hands. I'm older than I look. And I'm happy. 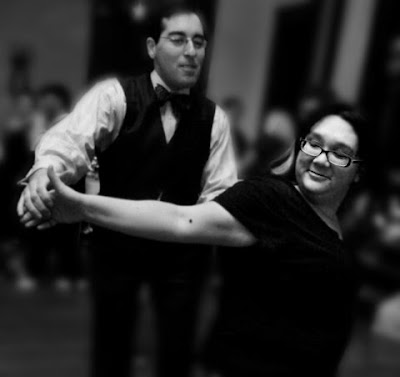 One more before bed

And what else am I going to do with the new year?

So on Monday, Fenna calls me during pub knit (yes, pub knit!) and says "it's really too bad that you can't come swing dancing in Cinncinati with me on New Year's." And I say "that's really too bad, it would be perfect."

On Tuesday, I borrowed her tattoo money (plus $100 in cash from her mother) so I could get a plane ticket.

On Thursday, I was in Akron.

On Saturday I was in Dayton, and then every country road between Dayton and Akron.

On Sunday I was in Cleaveland, and then I was home.
at 7:08 PM No comments: