Mah jong is a game for four players, generally set up on a card table so that all players can reach the middle of the table, and each player has a side of the table to put their tiles so that other players can't see.

There are three areas of a mah jong table: the wall, the discard pile, and player's hands.  The wall is made up of tiles that are face down and have not yet been played.   The discard pile is in the middle of the wall, and the tiles are generally played face up when discarded.  (A more difficult version of the game involves the discard pile being face-down, so players must remember what has been played.)  Each player has a hand of tiles at the edge of the table facing them that no one else can see.  At various points in the game, players may need to show parts of their hand.  These tiles are generally placed, face up, in front of the player. 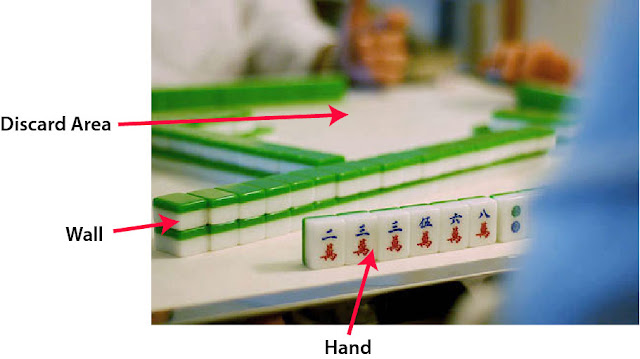 A mah jong tile set is like a deck of cards.  There are two main kinds of tiles: suits and honors.  Each suit consists of a tiles numbered consecutively from 1-9.  Honor tiles do not have numerical value.  There are also flower tiles, but they are set aside and used for scoring, rather than being part of gameplay.  I will get to them later.

There are two types of honor tiles: winds and dragons.  Wind tiles correspond with cardinal directions.  Dragon tiles are the characters for luck, middle (kingdom), and a blank tile.

The one-bamboo tile is illustrated with a bird, rather than a single stick of bamboo.  The white dragon tile sometimes has a decorated border around the blank white middle.

(My mother refers to the tiles by what the words say, rather than the names listed here.  For example, she will say "two ten thousand" and "luck" instead of "two character" or "green dragon."  Every other instruction set or game I've seen calls them "character" and "dragon")

A winning hand consists of four sets of three tiles, and one pair (called an "eye.")  A tile set consists of either three of a kind of the exact same tile (e.g. three North tiles, or three five-bamboo tiles) or three consecutive tiles within a suit (e.g. 2-3-4 bamboo or 4-5-6 circle).  Three of a kind is called "pung" and three consecutive tiles are called a "chow."  Sets can only exist within a suit.

Because the honor tiles do not have numbers associated with them, they cannot be used in a chow.  They can only be used to make a pung.  An eye must be two matching tiles.

Here is an example of a winning hand:


Each player starts with 13 tiles in their hand.  A turn consists of drawing a tile to add to your hand, and then discarding a tile into the discard area.  Then the turn moves to the next person on the right.  (Game plays counter-clockwise.)

1.  ON YOUR TURN: you can either draw a tile from the wall, or, if you can use the previously discarded tile to make a set, you can take that tile from the discard pile.


A.  You can only pick the tile that was most recently discarded, all other tiles in the pile are unusable.

B.  You may only pick from the discard pile to complete a set of three or complete a winning hand.  If you do pick a discarded tile, you must then put the set you make face up in front of you.  Once your tiles are face up, you can no longer re-arrange them into different sets.


2.  INTERRUPT:  If a player discards a tile that you can use to complete a pung (three of a kind), you may declare "Pung" and take that tile.  Then put the set you just made face up, discard a tile, and play continues to your right.  You can do this no matter whose turn it was next.  You may also draw a tile as an interrupt if it is the last tile you need to win.  You may only claim the most recently discarded tile, and only before the next player draws.

The game continues in this fashion, drawing and discarding tiles, until a player draws the last tile they need for a winning hand.  The player says "mah jong," and flips all the tiles in their hand face up.  There is no discard at this time, as a winning hand is 14 tiles.  When a player wins, then a new hand begins.
at 12:56 PM