Another Long Post About Gaming, But Not as Long as the Last One

So I started Dragon Age 2 last night.  Obviously, I have expectations and opinions, and I don't quite know where to start.

I guess a few little things:

1.  They've exaggerated Jenny's walk so that she sways her hips more dramatically which is fine when she's walking, but when she runs, it's sort of wiggly and silly-looking.

2.  I'm not a huge fan of frame stories, but this one isn't terrible.

5.  They're really getting to the uncanny valley here.  I mean, video games have been in the valley for a long time, but this is particularly weird because the face textures are so much more developed but the expressions and movement are way behind.  It's eerie.

6.  The "getting you started with combat" bit is more intimidating than I'd like.  I understand the appeal to other people, but for me, even if the enemy difficulty is dumbed way down, just having my first fight be a horde of darkspawn makes me cringe and not want to keep going.  It wasn't actually hard, it just felt like it would be.  And it's that feeling that they're going for, I know, the action-movie-feel.  But I'd much rather start the game by exploring and talking to people, then having a one-on-one fight while I get the controls figured out, and then moving on to battles.

7.  So many terrible hairstyles to pick from!  (And a few good ones.  I ended up liking default Hawke better than anything I could make, so I'm going with that.)

COMBAT:  I played Origins with more of a hack-and-slash style than a turn-based-tactics style.  This is mostly because the console interface made it difficult for me to control more than one character or manipulate the battlefield.  For example, there was no way to tell a character "go here."  I had to take over them, and run them over in real time.  During that time, everyone else would be on autopilot.  So if I wanted Jenny to cast Hex and then Drain Life while Alistair was running to the middle of the room, that was really hard to do.  I could pause, tell Jenny to start Hex, then switch to Alistair and start running, but keep an eye out so that I could pause again as soon as she was done with Hex and tell her what to do next.  I couldn't tell a rogue to "move behind so-and-so" without controlling them in real time while they moved, and while I'm in real time, I can only do one thing at once.

The changes in the combat interface for DA2 have made it much easier for me to control a full party.  I can, actually, tell someone to go somewhere.  It's also much easier to select a target, especially for regular attacks.  The game stays paused while you cycle through your party's actions, and then they execute them when you unpause, rather than unpausing as soon as I make a selection for one character, and then needing to pause again if I actually wanted to order more than one.

On the other hand, as many RPG gamers have complained, the majority of battles in DA2 are with enemies who appear in waves, from seemingly random locations, so I can't plan out a battle.  If it's almost over, I might decide to risk someone dying because I have more injury kits than health potions.  But I have no way of knowing when the battle is almost over.  I can't place my mage out of the way, because an enemy might spawn directly behind her.  So, on one hand, they gave me better tools to strategize, but then took away the information I'd need to do it well.

DIALOG:  In DA:O, the NPCs are fully voiced, but Jenny's part of the dialog is strictly text.  I pick a line of dialog, and then the NPC voices a response.  In DA2, like in Mass Effect, all of Jenny's responses have been voiced, and what I am choosing from is a short paraphrase of the actual line.  For example, a dialog choice in ME might say, "don't study me," and the actual conversation line will be, "I'm not some artifact you can take back to your lab, doctor."  I loved the dialog in ME, and so when I saw people complaining about that system in DA2, I wasn't worried.

But here's the thing about voicing the main character: it's a risk.  And when it works, it works really well, but when it doesn't it's terrible.  And this isn't working for me.  It's not exactly the voice, and it's not exactly the lines, but something about the two together just rubs me the wrong way.  "Funny" options are almost never actually funny, and "charming," just sounds like someone trying and failing at sexy.  And I keep picking the "funny/charming" options, even though I always hate the result, because I can't quite believe that Bioware can be this bad at witty dialog.

And choosing a line feels like so much more guesswork than it was before.  I don't have any examples, but somehow I was never that surprised in Mass Effect.  This time, every time I say anything, I feel like I should save first in case I don't like what comes out.  And I know that the game doesn't really respond to the specifics of the line, that if I pick the "diplomatic" option, then characters will respond as if it were a diplomatic thing to say, but it's frustrating and annoying because I feel like I'm not in control.  I pick options by thinking, huh, wonder what this will be?

In DA:O, there were multiple lines that might be funny, or direct, but with different import.  One might humorously accept or reject a romantic overture, for example.  The actual words mattered.  In DA2 it feels as if all that matters is the tone of voice, because that's all I have to go on.

According to the wiki, "diplomatic/helpful" choices generally result in positive NPC responses, and "aggressive/direct" choices generally result in negative responses.  It sounds like party members become friendlier to me when I'm nice and more hostile when I'm aggressive, regardless of the context or the personality of the party member in question.  Morrigan and Sten didn't like it when Jenny was helpful in Redcliff, but Alistair and Leliana wouldn't have liked it if she wasn't.  That is soooo much more interesting and dynamic than a simple "nice/mean" scale that all NPCs feel the same way about.  When I was having a dialog with Morrigan, choosing the "sympathetic" or "understanding" option might piss her off.  She doesn't want your damn sympathy, thankyouvermuch.  And using humor with Alistair goes very differently than using humor with Sten.  Although it depends on who the humor is directed at, of course.

I'm trying to remind myself that the game has just started, that I need to give it a chance to be what it is, and not a copy of another game.  I'm trying to remember that I didn't love all my NPCs immediately, that they grew on me over time, and I wasn't in love with Origins right away, either.

Also, here is a totally unrelated screenshot that amuses me. 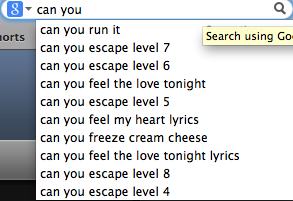