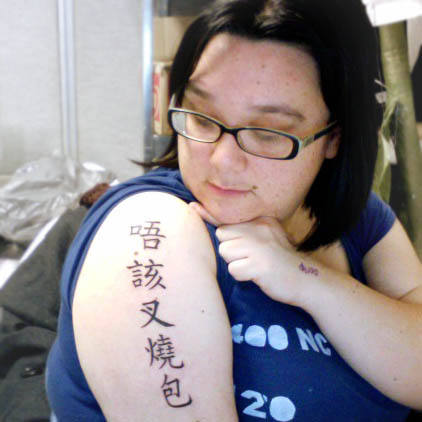 When I was in college, and the "thankyouporkbun" meme was just beginning among my friends, I also claimed to know kung fu and the ability to read Chinese.  It was easy, because I also claimed that everything said, "fuck you, white bastard."  Now, when I talk about mis-translated Chinese characters, it seems as if people always go to food rather than profanity.  When I was telling the story of getting my tattoo fact checked (without having yet said what it says), someone said, "Yeah, you wouldn't want it to say soy sauce or something like that."

And I find that, while I intentionally wore a short sleeve shirt today so that it will be seen, I don't have the same desire to find everyone as soon as possible so I can show them.  I think that it's because the value of the tattoo isn't decoration.  I mean, it is decorative, and the lettering is lovely and delicate (a little extra delicate, I think, because it will blur a little over time), but it is much more matter-of-fact than the others.  And I don't really feel like bragging.
at 1:49 PM