First Person Shooters: There is Shit Going On

I've actually linked to part III of Wanenchak's essay, which is the part where she discusses the cultural narratives of war as seen in video games.  I suppose that I've been giving FPS, especially war-themed FPS games the same kind of condescending brush-off that non-gamers give all video games.  Having read the essay, I'm starting to think that I need to learn to play a FPS so I can be in on this conversation.  (All quotes, unless otherwise noted, are from the linked essay.  Apparently reading Cyborgology also makes me want to take better care with my attributions.)

Cassie had told me about a game in which there are no good endings, where the only possible options all have horrific results.  As a player, your actions become more and more brutal, and you are given no choice in the matter.  The only way to stop is to stop playing.  Period.  There is no other way out.  I had assumed that it was an indie game, a kind of statement piece, but it turns out that the game is Spec Ops: The Line, which is pretty damn mainstream.  I looked up the wiki article and...wow.  It's Heart of Darkness in Dubai except that Marlow is Kurtz.  The soldier and the despot are one and the same.

The Line is intended to critique other FPS games, especially war games like Call of Duty.  In the words of the lead writer,


There’s a certain aspect to player agency that I don’t really agree with, which is the player should be able to do whatever the player wants and the world should adapt itself to the player’s desire. That’s not the way that the world works...this is not a world that you are in control of, this world is directly in opposition to you as a game and a gamer.

But even the Call of Duty games are consciously manipulating choice and agency with an awareness of it's implications.  Wanenchek describes a scene from Call of Duty: Modern Warfare:


In one of the most haunting – and unusual – sequences of the game, the player crawls from the wreckage of the helicopter, struggles to his feet, and looks around at a burning nuclear wasteland before dying of his injuries. There is no way to survive the level, no weapons to wield and no one to kill, and not even really anything to do but to exist in that moment and bear witness to horror before expiring.


In CoD: Modern Warfare 2, there is a scene where the you are infiltrating a terrorist group, and the group opens fire on civilians in an airport.  You cannot prevent the attack.  You cannot fire back at the terrorists.  You cannot save anyone.  And this is not a cut scene.  You are a player character, and you have a gun.  You can stand there and watch, or you can pick up your gun and shoot. 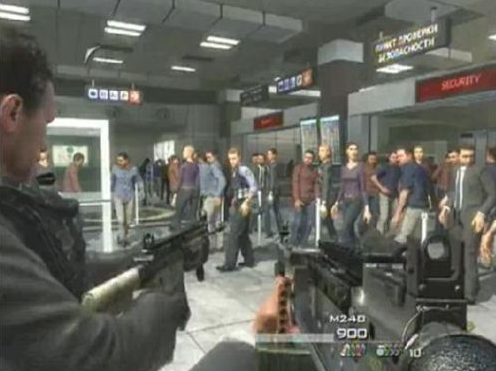 When some critics suggested that they would have preferred to have the scene play out as a cut scene, or as a game from the perspective of a civilian trying to escape, one of the game designers responded by calling those suggestions "cop outs."  The point of the scene is to give the player a gun that they can fire, and a compelling reason to choose not to.

—And here's where I would write some thoughtful things about these games, and connect them to the games I've played, if I were doing anything but summarizing someone else's essay.

And, appropos of nothing really, I found this gem in the comments section on a blog post about Spec Ops:


...The Hunger Games is a work of fantasy, and to a large extent an escapist fantasy for adolescent girls (two boys, amazing dresses, cool fights, saving the day)...

I'm not sure I can eyeroll hard enough. Because 1) that's totally what Hunger Games is about, in that order, boys, dresses, and oh yeah, winning the revolution.  And 2) adolescent girls don't struggle with feelings of powerlessness, devotion to family, grief and loss, people in power who condescend to them, or anything that would make them want to fantasize a way to deal with it.  They just want boys and dresses.  And yeah, he does mention "cool fights, saving the day," but if that were the important bit, he wouldn't have specified that it was an escapist fantasy for girls.  It's the boys and dresses that make it for girls.
at 12:23 PM