When I was in fourth grade, I wrote a poem about Thanksgiving.  It started with the lines The air is crisp / Leaves turn red and brown.  It was the kind of poem you'd expect it to be: sing-song meter, ABCB rhyme scheme, four stanzas long.  What stands out to me, now, is my description of the season.

I grew up in southern California, where the natural flora stays a dull gray-green all year, and the sprinkler-fed trees are greenest in the winter. The colors of summer in Poway are brown and gold, dead grass and thirsty trees. It rains a little in autumn and winter, just enough for some natural greenery, although still not enough to turn the sprinklers off. No one has a lawn without sprinklers. There is no spectacular changing of the trees as they transition into winter hibernation from their lush summer extravagance. I had never seen the season I was describing in my poem (if I had, I might have more accurately correlated it with Halloween, not Thanksgiving), but I knew what it was supposed to look like.  Everyone knew that.  There are flowers in the spring, and green trees in the summer, red and yellow leaves in autumn and snow in winter.  That's the way the world works.

When I went away to college, it felt as if I were—finally—seeing the world as it was supposed to be. These were real seasons. As if my seventeen years of lived experience were somehow all a lie. An abberation. For the first time, the world in front of me looked like the world in my head, and it was magical. 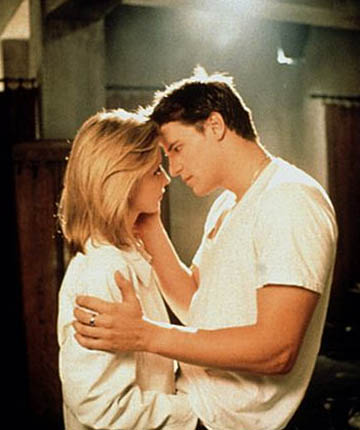 Looking up photos of evil Willow left me with a hankering to watch Buffy again, so last night I picked up my rewatch where I'd left off in the middle of season 2. It happened to be right before Buffy has sex with Angel and he loses his soul, thus confirming every teenage girls' fears. Or, at least, that's what people say about the episode. Buffy the Vampire Slayer explores teenage struggles by giving those struggles supernatural metaphors. Bodies growing hair and emotions feeling stronger and harder to control? That's because you're a werewolf. Teacher acts like you're lower than dirt? She's actually a monster who wants to use you to host her parasitic babies. Boyfriend acts like a different person once you have sex with him? He lost his soul.

But the virginity-losing episodes in Buffy, and in most tv and movies, tend to leave me feeling alienated and strange. They are familiar, because I have seen them so many times, but they are nothing like my actual experience. In the same way that I knew what seasons were like from illustrations of them, I know all of the things that a teenage American girl would worry about from stories about them. Losing ones virginity is a Big Deal. Too soon and she's a slut, too late and she's a prude, it's the ultimate experession of love, it changes a relationship, it's the "next level," and maybe it might feel good but sometimes she shouldn't do what feels good because that's wrong.

At sixteen, Boyfriend #2 overruled my decisions about having sex, but I had been making that decision for a full year before that. My "not having sex" was a decision and not a default, and it had nothing to do with morality, either the church-going kind or the teenage social policing kind. I didn't think it would change anything, either my identity or our relationship.  There was no meaning attached to sex, no emotional risk.  I was only worried about possible physical side effects.  If I could have had access to birth control I trusted, I would have had sex a year before, with Boyfriend #1.  We wanted to, we’d discussed it, but I was too afraid of pregnancy, which I sort of equated with death. It was strictly a practical decision.

(Thinking back on it, I'm amazed that the two of us, fifteen years old, in our first relationship, had the trust and maturity to actually talk about sex and make decisions about it together. I still wasn't able to have that discussion with any adult who might have helped me, but we were honest and open with each other.)

But, even though the virginity stories in Buffy and Dawson's Creek, and My So-Called Life, and everything aimed at teens, ever, have nothing in common with the teenage years I lived through, I still credit the stories as being the "real" ones. They're ingrained in my cultural consciousness as "normal." When I see them, I don't ever criticize the stories for being unlike my life, I criticize myself for somehow doing it wrong.
at 1:10 PM