At least, with better color correction. 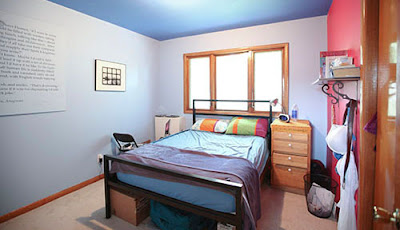 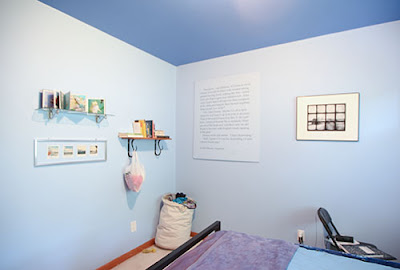 Really, this is me showing off 1) my awesome paint and decorating choices, and 2) it's CLEAN.  Everything has a place, even if that place for bras-I've-worn-and-will-wear-again-before-washing is hanging off the bookshelf.  This is not my room's "showing off for company" face.  This is its normal hanging out face.

I made my bed every day this week.  (My definition of "bed making" isn't traditional, but it's neat and I like it.)  I have spent a few days in between doing laundry and putting clothes away, so there are a few days when dirty clothes are piled in the corner instead of in the hamper, but never long enough that the corner spills out into the rest of the room.

I am ridiculously proud, but I'm also having trouble being proud, because I've invested so much of my self-definition on being someone who doesn't care.  Lots of people are unsettled in messy environments.  I get that.  But I'm not that person.  Mess doesn't bother me.  It doesn't interfere with my feeling comfortable or productive or relaxed or happy.

I got so used to not needing a pretty environment that I decided that it was a worthless goal for me.  I worked on not screwing up public spaces, but my room, my office, have always been a wreck.  Seriously, I am 33 years old and I have never had a room that wasn't a mess 99% of the time.  And I didn't care.  When people said "you'll feel better once everything is neat," it sounded like when they said, "you'll change you mind about kids."  It sounded like "I know you better than you know yourself," bullshit.

I like good food.  But, most of the time, I eat frozen meals that taste like frozen meals, because I like them, too.  Not as much, but I'm not bothered by the lack of food goodness.  I don't pine for better.  Neatness is like that.  So, most of the time, the benefit I get from enjoying a neat environment isn't worth the effort in creating one.

But "not worth the effort" isn't the same as "not enjoyable."  This feels like such an obvious thing to say, but it's actually difficult for me to admit to.  I do, actually, enjoy a neat environment.  And maybe in the past the effort wasn't worth the benefit, because I had less resources to allocate.  But, right now, I have the resources.

Tagged: I made this, issues