I hated Anders when I first met him in Awakenings.   I wasn't sure I believed him when he said that he hadn't, actually, killed the templars I found him with.  And then he fucking joked about how funny it was when they died. It was gross. At best, I thought he had deliberately let them die. I didn't trust him, and I didn't like him, and I was playing Mage Jenny and was still a little raw over the way the game glossed over Alistair's death. And here was some other guy who was supposed to be good looking, with blondish hair and a smart mouth and he seemed like he was supposed to replace Alistair, as if anyone could. Also, he had a ponytail. I am so not into ponytails on guys. (Honestly, I never thought that Alistair was that good looking, even for CGI. A younger Duncan would have been much sexier. Duncan had a ponytail, too, but he also had a beard, which compensates. But I digress.) 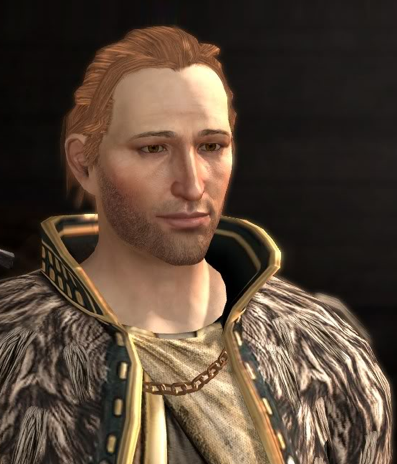 By the end of Awakenings, Anders mattered to me.  When I saw the mistaken codex entry saying that Anders was dead, it made Thedas that much less of the world I wanted it to be.

It's funny, because now that Anders has become Anders-and-the-twisted-spirit-of-Justice, he and Alistair are sort of opposites of each other.  Not only is Alistair a templar and Anders a mage,  Alistair is a boy scout that Jenny can seduce, and Anders is an ex-libertine who mended his ways.  Alistair starts out believing the best of people, and Jenny can help him become more cynical.  Anders starts out cynical, but I think that romance with Jenny will soften him.  Figuratively, of course.  Physically... 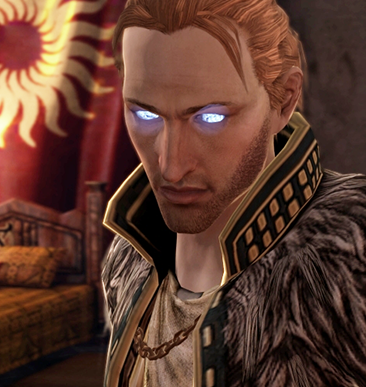 But as much as I want to like this Anders, with his greater capacity for empathy, and his longer-term goals, and his complicated half-terrible-spirit-ness, I'm finding him rather flat as a character.  Apostate Jenny is navigating all these ethical quandaries in front of him, but the only ones he ever cares about are the ones involving templars.  Here's a list of things she's done that Anders doesn't care about:

Jenny killed a rebel mage in cold blood.  Anders didn't care.  If Jenny had sent her to the templars, then Anders would have cared.

The son of the magistrate was discovered to be a serial killer who had been kidnapping and killing elf children from the slums, because the voices in his head told him that elf children were too beautiful and needed to be punished.  He escaped his home-imprisonment, and Jenny was tasked to bring him back.  If she turned him in, nothing would change.  His father would try, and fail, to restrain him, and more elf children would die, and it would all be covered up because no one cares about elf children.  So Jenny decided to play vigilante and kill him rather than bring him in.  Isabela approved.  Even Aveline-the-lawful approved.  Anders, however, didn't care.

Jenny stood up to the viscount on behalf of the Qunari, a foreign people the viscount believes to be terrible and savage.  One might think that someone who is on a quest to allow the Other to be treated as people might appreciate that sentiment when applied to a different Other.  But, no.  Anders didn't care.  Only mages count.

I really like Anders on paper.  I like the idea of him.  But I'm disappointed in how he's turning out.  Even his banter is a little less funny than it was in Awakenings and a little more preachy and single-minded.  I want to like Anders, because Mage Jenny cared about him.  And I want the character Apostate Jenny romances to actually like her, and she's too lawful for Isabela and too much the mage for Fenris.  And Merrill—I adore her, but I'm not sold on a romance with her.  Plus, she's going to want me to be all pro-blood-mage-and-demon-and-stuff, and, while I think she's got it handled, I don't want to support blood mage as a general life choice for everyone else.  I can't be with Aveline, as much as I'd like to.  So that leaves Anders, dammit.
at 1:12 PM