I've finished the game, so we can assume that all Dragon Age posts from this point onward have ALL THE SPOILERS

You wouldn't know it from my blog, but there are, actually, other characters besides Alistair in the game.

This is about Morrigan. 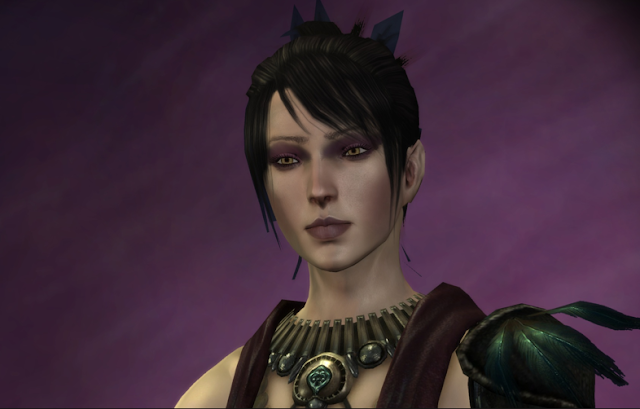 I had heard something, prior to getting to the end of Dragon Age, about Morrigan wanting a demon baby and having sex with Alistair, and I immediately closed my eyes and thought LALALALALA.  So I was still moderately surprised when I got to that part of the plot.  And here's the thing: it makes so much sense.  It's the missing piece that explains her character throughout the entire game.

Morrigan has always known this was her part to play.  And she has conflicting feelings about it.  On one hand, she sees the old god as a powerful, wild, thing, that has been trapped and misunderstood.  She wants to give it a chance.  She wants to save it.  Of course she does.  She is wild and powerful and feared and misunderstood.  They are of a kind, the god and her.  And yet, she's got complicated issues regarding other people, since she's been raised as a hermit in the woods with her mother, and she's never had a friend or a lover (it's not explicitly said, but one can infer from her story), and the idea that she will need to in order to save a god has got to be intimidating for her.  So she's trapped in this plan, and she meets the guy she's going to have to boink, and he's a templar.  His job is to hunt down and kill people like her.  He doesn't like her.  He doesn't want her.  He wants someone else, and if there's anything worse than having to have sex with someone for the greater good, it's being rejected by that person.  Just because she doesn't want him doesn't mean that he shouldn't want her, right?  I totally get that.  So she resents him.  She pokes at him, and teases him, determined to prove that she doesn't care at all what he thinks of her.  And she resents Jenny, a little, because she's the one he wants.

And then, Jenny refuses to accept Morrigan's solution.  It leaves her with no purpose.  All she can do is watch her friend die, needlessly, out of ignorance or prejudice.  It means that the old god will die, because her friend would rather kill something wild than let it free.  Her friend would rather die than let something wild have a chance.  And, sure, Jenny doesn't see it like that.  But Morrigan does.  It is a condemnation of what matters most to Morrigan, a betrayal of their friendship, and she leaves that night for good.