So, you know how I was saying that I built up "being fat" as the thing stopping me from all these things I want?  Here's one example. 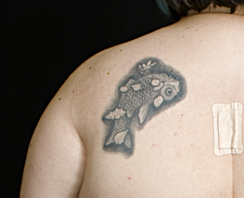 I got it when I was 19, at Dragon Moon in Glen Burnie, Maryland.  It's part of this Escher print: 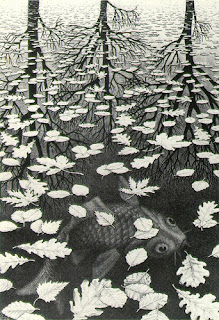 And, pretty much since I got the tattoo, I have been aware of how it could be better.  It's not that I don't like it, it's that I know how I'd like it more.  I wanted the tattoo to fade in and out of skin, rather than have such a distinct line between the filled-in water areas and my skin.  Sort of like this: 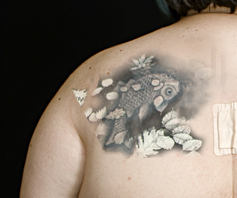 (Please excuse the sloppy Photoshop.  I think you get the idea.)

So, for the last 13 years, I've had this "some day I'll fix my tattoo" in my head.  But first there was the problem of having the cash and not having other things I wanted more.  And then,  once I started losing weight, my "someday tattoo" plans got mixed up with that, and it wasn't just "when I have the money," but "when I like my body."  Or "when I get thin."  It was one of the rewards I set up for myself for when I succeeded at my weight loss goals.  And any other tattoos I might want have to wait until I fix the one I have.

And I was talking to my friend Fenna, who has many gorgeous tattoos, and is planning some more, and I was so very jealous.  Because I want more tattoos.  And I was explaining why I can't get more tattoos, because first I have to do this, and then this, and wait for this.  And I finally decided that I didn't want to follow the rules I made up because I felt like I should.

So I'm getting a tattoo.  I am getting a new tattoo before I fix the old one.  I am getting a bright red heart with a banner and possibly flowers or birds on my left boob.  And I am leaving the banner blank so I can write in whatever I feel like heart-ing for the day.  And, yeah, it's a joke tattoo, which I would have told you was not a good idea.  But I've liked the idea for, oh, five or six years so far.  And I want it.  And I've decided that I can have it.
at 10:33 AM