Oh, and I found out something about Morrigan.  It really makes me want to play Dwarf Jenny again, even though he annoys me, because he's the only one who can woo her.

Eventually, [Morrigan] becomes afraid of the affection she feels for the Warden – to a point where if you raise her approval rating to “love” without having sex with her, she will not have sex with the Warden at all. Her own feelings scare her, and she’s not sure what to do about it, especially because she knows about the Dark Ritual. She knows she’ll have to leave the person she’s falling for, and she’d rather be alone than have that happen. 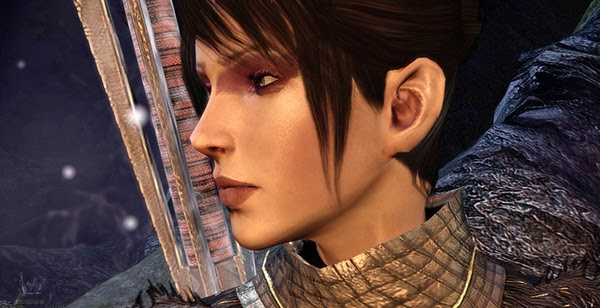 Everything that Morrigan is, is a defensive mechanism.  She doesn't know how to relate to other people, so she pushes them away.  She doesn't want them before they might not want her.  She always chooses personal gain, even at the expense of others.  Because she believes that's the way the world works.  It's what she needs to do to survive.

See, Morrigan was raised playing Prisoner's Dilemma with Flemeth.  And Flemeth always chose betrayal.  Morrigan assumes that the world punishes the kind and rewards the selfish, because for her it was true.  Now she's playing the same game with Jenny, and no matter what Morrigan does, Jenny refuses to turn her in.  It changes everything.  Morrigan's survival strategies don't work the way they should, not in a world where people like Jenny exist.  After all, the best outcome in an ongoing game of Prisoner's Dilemma comes from being able to hope for the best, being able to trust someone else.

There is no moment where Morrigan announces that she's changed.  But I like to think that her experience with Jenny makes a difference.  I like to think that she's too smart to not notice that the world is not what she thought it was, that in the long game, kindness and forgiveness and trust and hope can sometimes—not always—be winning strategies.