PART 4: THERE WAS GOING TO BE A POINT AT THE END OF ALL THIS BUT I THINK IT GOT LOST SOMEWHERE SORRY 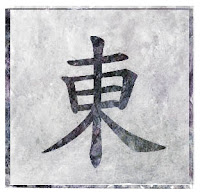 There are four rounds in mah jong, and each round is made up of four or more hands.  Each player is dealer at least once per round.  If dealer wins, then they deal again, if not, then the deal passes counter-clockwise.  When all four players have dealt, the next round starts.  Each round corresponds with a wind (East, South, North, West).  Each seat also corresponds with a wind.  The seats rotate according to who is dealing.  Dealer is always sitting at East seat.  The seat to the RIGHT of the dealer is South.  (Don't ask me why cardinal directions are backwards.  They just are.)

To start a hand, players begin by mixing all of the tiles in the center of the table.  This is the noisy part.  When the tiles are reasonably mixed and unpredictable, each player begins constructing their side of the wall.  Each side is eighteen tiles wide and two tiles tall.  There is a skill involved in this, if you choose, because experienced mah jong players will construct two rows of 18 side by side, and then, by grabbing one row by each end, lift all eighteen tiles at once on top of the other row.  This is super cool.  You will be super cool if you do it like this.  All the old Chinese ladies and also your ten-year old cousins will be TOTALLY impressed.

Each wall is then pushed towards the center until they meet in something like a square.  It should look less like this: 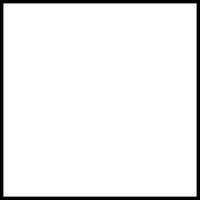 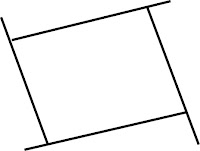 It represents, of course, the great wall of China.

Once the wall is constructed, the dealer rolls three dice.  Starting with the nearest side, dealer counts that number counter-clockwise around the wall.  A dice roll of five, nine, and thirteen land on the side nearest the dealer.  A dice roll of three, seven, eleven, fifteen, land on the side opposite the dealer, and so on.  Once the side is chosen, starting on the right of the side, dealer counts the same number of tiles towards the middle.  Where the count ends, the wall "breaks."  Tiles to the right of the break are the "dead" tiles, and tiles to the right are "live."

Starting at the break of the wall, and going clockwise, the dealer takes the next four tiles from the live side, then hands out sets of four to the other players.  Tiles are taken from the wall clockwise, but are dealt to players counter-clockwise.  When each player has twelve tiles, the dealer "hops," and takes the next top tile, then the top tile one over from that tile.  Each next player then gets one more tile.  At the end of this, the dealer has 14 tiles, and everyone else has 13.  Dealer begins the game by discarding one extra tile.

When a player needs to replace a tile, for example, because they drew a flower, or made a kung, the replacement tile is drawn from the opposite end of the wall.

In all the computer versions I've played, whenever a player discards a tile, he/she announces what the tile is.  I don't remember if anyone ever did that in my house or not.  They talked.  I never understood anything they said.  Maybe they were saying "three-ten-thousand, bitches!" and maybe they were saying, "did I tell you what my grandson said to me yesterday?"  I have no idea.  But since I'm more used to playing with a computer, I'm used to hearing people announce their discard.  Or, at least, I'm used to mechanized voices repeating in monotone, red dragon, two bamboo, three character.
at 12:14 PM