I want to talk about Aveline. 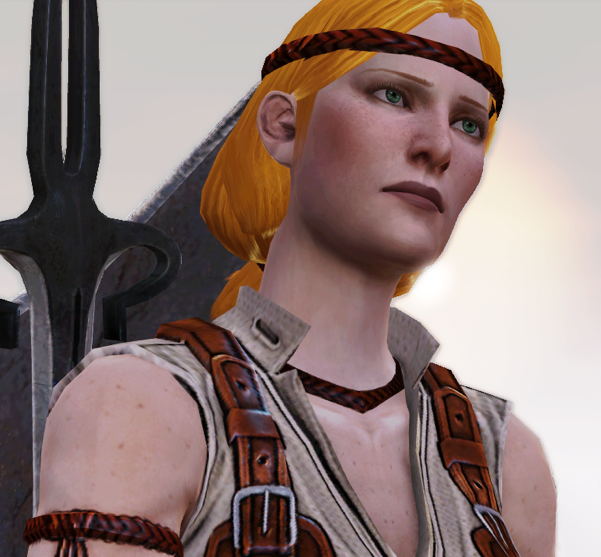 I'm only about 10 hours of gameplay into this so far (I started over when I realized that if I wanted to play Lawful-with-a-touch-of-Chaotic-Good, then I really should have signed on with the mercenary instead of the smuggler.)  There is a lot more story and character development yet to come.  Here's what I've seen so far.

Aveline Vallen is Lawful Good, Warrior-Class, Sword-and-Shield.  Gameplay-wise, she is a lot like Alistair.  She likes it when Jenny is nice to people and upholds the law, and she keeps enemies distracted while Jenny does fun magic stuff.  But she is not Alistair.

The first time you meet Aveline, she's beating the crap out of the darkspawn who was about to kill her husband Wesley.  You will not have him, she says, before she grabs its sword and takes off it's head.  This is Aveline: fierce, protective, determined.  But even though she saved Wesley from the attack, she couldn't save him from the darkspawn taint.  When Wesley asks her to save him from a slow, agonizing death, she puts her hands over his, and uses her strength to drive his blade down.

It's hard to not look at Aveline as a Strong Female Character(tm).  She is physically strong, and physically tough.  She fights with strength rather than speed or finesse.  She continues fighting in the face of personal tragedy and heartbreak.  She killed the man she loved because it was the right thing to do for him.  But Aveline isn't strong because she's rejecting traditionally feminine traits.  She has a maternal protectiveness towards her friends, she cares more about relationships than sex.  When she presents a stoic face, she makes it clear that it's because she isn't ready to share her feelings, because her feelings are important to her, rather than because she's too tough to have feelings.

And, unlike so many badass women, she is believably physically strong.  She's not a waif with a sword bigger than her waist.  And she is believably strong without being a butch caricature.  She isn't stereotypically sexy, nor is she de-feminized.  She has a prominent jaw and a wide but not overly full mouth.  She has broad shoulders and muscular arms and thighs.  She is neither flat chested, nor can she store all her inventory in her cleavage.  Sometimes, I think she's beautiful.  Sometimes, I don't.

In Origins, Ser Aveline is a legend about a woman with no choice or agency, whose life only matters in the way she affects the men around her.  In DA2, Aveline Vallen is a woman who rejects that legend.  Her femininity is neither a weapon that defines her, nor something to struggle with, to reject.  Isabela is the standard femme fatale, who bares a lot of skin, uses her sexuality to manipulate others, fights with acrobatics rather than brute strength, and likes sex but avoids feelings.  I'm sure that Isabela will develop a backstory that gives her more depth, but there are so many Isabelas in the world already.  Aveline is herself.

I was so glad to see that Aveline was a romance option.  Having Jenny pursue a romance with Aveline would show that Jenny finds her attractive, that Aveline isn't any less of a woman for being a different kind of woman.  I was so glad to see variety in the kinds of masculinity and femininity being modeled.  But it turns out that I was wrong.  Neither Aveline nor Varric will enter into a romance with Jenny.  The dwarf and the lady-soldier.  As if they didn't count.
at 5:31 PM