This is going to be rambling.  And long.

I restarted my OKC account so I could message someone and give them my email address, but I have to wait a week before I can disable it again.  And here is Bacon Sushi Guy, again, saying hello.

At some point in DA:O, as I was going back to camp yet again, after a plot point or experience gain so I could see if anyone had new dialog, I wondered just how much time I've spent doing exactly this.  Going back to camp, or my ship, running around and having variations of this dialog:

NPC: Hello
JENNY:  I'd like to talk about something.
NPC:  Okay.  What do you want to talk about?
JENNY: Oh, nevermind.
NPC: Yeah, bye.

Every. Damn. Game.  It's not just DA:O, it's every other Bioware game I've played (including the non-Bioware sequel).  I really like the party member relationship arcs, romance or not, so I look forward to new conversations.  And since there's nothing that signals "new dialog," the only way to find out is to keep trying, over and over.

It is, in terms of gameplay, only slightly more fun than chopping wood.  But only because chopping wood takes longer.  (Worst use of day/night in a game ever.)


So I am glad that Bioware finally noticed how much of an annoying timesuck this part of the game can be, and found a way to avoid all those neverminds and goodbyes.  In DA2, when party members have something new to say, there's a quest notification.  Go to house, have dialog, quest over.  The dialog may or may not be particularly quest-like.  Sometimes it's just "Hey how's it going? You settling in okay?"  I don't love the framing, but it works out fine in gameplay.  Mostly it just means that I can't repeat conversations.

(I will admit that in DA:O Jenny and Alistair repeated conversations more often than strictly necessary.  After all, there are conversation options that involve kissing and sexing, and he says cute things when you initiate them.  Like, "Aha!  I see talking isn't what you had in mind.  Right then!"  And there was this one time when I experimented with giving him coal and rotten onions until he didn't like me anymore, to see what would happen to the relationship.  He was mad.  It was upsetting.  So afterwards I restarted my save game and we made out a few times to reassure myself that I hadn't actually broken anything.)

But, overall, the value of being able to rehash the same dialog is pretty minimal.  Which is too bad, because I'd really like to blame my last few hours of gameplay on the new dialog system.

I went through the Anders romance last night.  It was so bad I don't even.  And at first I tried to attribute the badness to DA2's conversation mechanics.  Maybe it was because the quest-dialog structure made for fewer conversation opportunities.  If Jenny and Anders had spent more time talking, joking, getting to know each other in more than one dimension, maybe the Very Emotional Declarations of Love woudn't seem so ridiculous.  If I had an emotional connection to Anders, maybe I wouldn't cringe so much when he gets all SRS BIZNZ.

But the thing is, I have an emotional connection to the rest of my party.  I think that there have been fewer conversations between Jenny and her party members, but not by a lot.  And the party banter is still one of the highlights of the game.  I can't blame the bad on changes in dialog structure.  Anders fails all on his own.

I dislike linking videos, so you should imagine these lines being read by a high school drama student trying to channel Dr. Frankenfurter:

You've seen what I am… I've tried to hold back, but I'm still a man.  You can't expect me to resist forever.

This will be a disaster, but I can't live without it.

If you're with me, we'll be hunted!  Hated!  The whole world will be against us!  If your door is open tonight, I'll come to you.  If not, I'll know you took my warning at last.

For three years, I have lain awake every night, aching for you.  I'm still terrified that I'll wake up.


(I wanted to make the quotes as purple as the prose but fuchsia was closest I could find.)

First of all, WHY THE FUCK is it NEVER mentioned that Jenny is ALSO an apostate, and ALSO running from templars and leading a double life and if her secret gets out she'll be hunted and hated and all the rest?  Secondly, all those cheesy oh I can't but I must lines, the don't tempt me's wouldn't be so obnoxious if they came from someone like Fenris, who seems to have a similar opinion of romantic entanglements.  But Fenris would say them with fewer exclamation points.  And a lot more smolder.  Anders just sounds angsty.  I keep expecting him to toss his hair or something.

(Part of me worries that Anders bothers me because he isn't performing masculine appropriately, that I'm attributing traditionally feminine traits to him and criticizing him for them.  But I think it's a boy/man issue for me.  I don't mind him being all FEELINGSFORYOU, I just want him to have some reason for them and some backbone about it.  Some self-confidence.  Some lines that aren't delivered with pity-me-eyes.)

The only good parts of the Anders romance scenes are the parts where he isn't talking.  A good heavy breathing can be a lot sexier than words.  I'm not sure I would have added the actual kissing noises, but the uhs and mmms were nice.  And the sex scene was pleasantly non-gropey.  It wasn't The Unstoppable Hand vs. The Unsquishable Boob.  Just a camera panning away while the two of them lie together, and then the screen fades to black before it gets embarrassing. 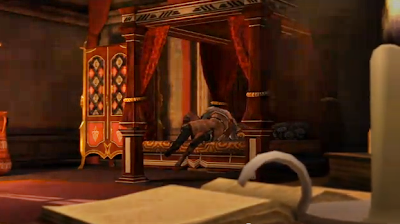 But, dear god, as soon as the sex is over, that terrible dialog comes back, and it's like the dramaz is contagious, because Jenny starts saying things like, "I want you right here!  Until the day we die!"  And I'm looking around trying to figure out where the hell all this came from.  They never even talk!  Where does all this "love" come from?

I'm not saying that friendship has to come before romance.  There doesn't need to be a deep and meaningful connection before sex.  Jenny slept with Isabela without any deep, meaningful, conversations.  But love isn't romance, and it isn't sex.  Love doesn't just swoop down like that.  Love builds.  Maybe unawares, at first, but the pieces are there even we don't see them: the conversations, the emotional connections, the intimate moments.

It happens with everyone else.  Banter with Isabela becomes, "hey, you're a good person and I like you."  Fenris, after being helped and supported by Jenny, feels close enough to confide in her.  So does Merrill.  They talk about themselves.  And even though there are relationships forming, no one else has declared FEELINGS.

I didn't save that particular game.

I'm also having problems with the romance with Merrill.  Because I actually like Merrill a lot, and it bothers me that Jenny doesn't seem to take her seriously.  Jenny flirts with Merrill by treating her like an adorable child, someone "sweet" and "pretty."  She never praises Merrill for her strength of belief, her bravery, her kindness and caring.  I know that Merrill has a childlike appearance.  Her voice is high pitched and unsure, she's got a child's big-eyed face (and the graphics people went to town on the whole shining-elf-eye bit).  But she is not a child.  I hate that Jenny treats her like one.  And it's even worse when "treating like a child," is part of "flirting."  It's gross.  Merrill, you deserve better.

Hmmm… who do I want to ship Merrill with? 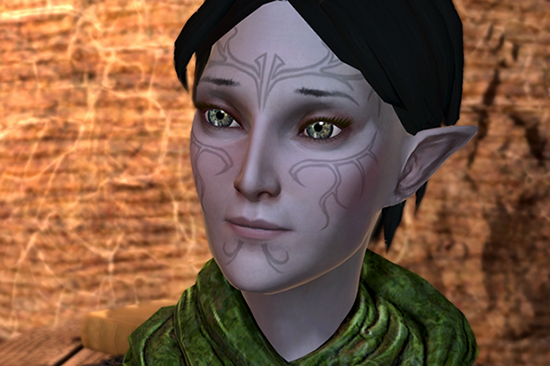 Someone grumpy and stoic, I think, like Fenris or Sten.  Or—wait.  She actually might be able to get Anders to grow up.  Get him to think about something else besides his revolution.  It's not like Anders has a monopoly on "oppressed and hunted."  Merrill has a big goal for herself and has sacrificed a lot for it, and she still likes sun and flowers and stuff.  Question is, what does he bring to the table?  I can see why she'd be good for him, but would an improved Anders be good for her?  I'm not going to ship her as someone's manic pixie dream girl.

I need to think about this…

Also?  I soooooo want to read this: 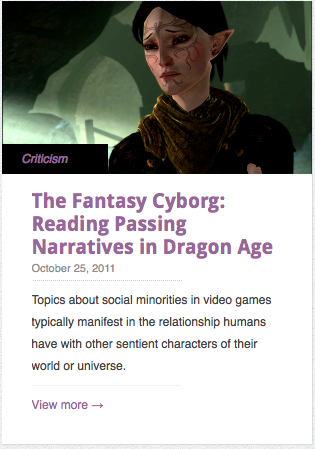