I HATE THE ENDING OF DRAGON AGE

I actually finished Dragon Age right before the move.  And it pissed me off.  SO much.  Which, I guess, is further evidence (as if I needed more) of my total emotional investment, that it had the power to make me upset.

Remember when I talked about how I'd "achieved" sex with Alistair, but there was still relationship progression to happen?  I was wrong.  Once the sex starts, there is nothing left to say.  Or rather, there is ONE more "where is this going" conversation that ends with "we'll have to find out."  And then, nothing.  All sorts of shit goes down, plot-wise, and none of it is conversation fodder.  Alistair is going to be made king!  Alistair doesn't get made king!  Logain dies for his sins!  One of the Gray Wardens has to die to save the world!  It might be Alistair!  It might be the love of his life!  All sorts of things that he might have something to say about, but there is NO dialog.

The night before the big battle, Alistair either spends it boinking Morrigan, or he kicks you out so he can sleep.  There is no resolution, there is no HEY THIS MEANS SOMETHING, there is no acknowledgment of the relationship.  There's ALWAYS a "last night before final level" scene!  Mass Effect had it, KOTOR sort of had it, Jade Empire had it.  But not Dragon Age.  Because we'd already had sex, so there was no "first time," and apparently that's the only thing that matters.  I mean, once there's sex, it's done.  There's nothing left to happen.

Dear Bioware: THAT IS NOT HOW SEX WORKS.  If you think it is, YR DOIN IT RONG.  (With a a side note of one of Cassie's annoyances, that games and books tend to treat sex as an all-or-nothing kind of thing.  There's no "spending the night together making sexytimes with some of our clothes still on."  It's step 1: sex.  Done.  Seriously, has no one in fantasyland discovered oral sex?  Also dry-humping.  I highly recommend it.)

And then I was going to sacrifice Jenny to save the world (and, obviously, to save Alistair) and he DIDN'T LET ME.  (Let me clarify, this part is me being pissed at him, but not the game.  This was a shocking but not badly written element.)  I was having my last conversation, which I expected to be the fucking resolution part, and instead of that, he just ends the conversation, runs past me, and becomes the sacrifice.  And I was just sitting, jaw open, unbelieving.  I didn't get a choice.  He didn't give me a choice.

If I hadn't fought so hard to sacrifice Jenny, there would have been a last kiss, at least, but I didn't even get that.

And then there's the "everyone in the throne room feeling self-satisfied" bit and I'm still reeling with DEAD ALISTAIR, you know, my fake boyfriend, and the love of my character's life and all, and it just gets brushed over.  When Wynn says "Hey everything's great!  What more could we ask for?"  I respond with "Alistair.  Alive."  And she says, "Oh yeah, that.  Sorry."  Like, NO ONE CARES.

Even the ultimate sacrifice scene was given so much less screen time than the first battle scene at Ostagar.  When Duncan and Cailan die, we see the desperation and rage and despair.  We see Duncan running over to the body of his dead king and holding it in his arms.  When the army goes off to war, we get a long scene.  Parents saying good bye to their children, a speech in front of the city gates, the darkspawn looking up to the impending assault.  We even got a scene after Cailan died, when we find his body, and there's a montage of all our memories of Cailan, even though we only knew him for, like, a few days, and he was kind of an idiot, so there isn't much.  When Alistair dies, we see people happy at the turning tide of battle, and then we see explosion, and then Jenny wakes up with a bunch of happy people.  If the player character dies, there's a funeral, but Alistair doesn't get one.  His death is given no weight.  No one mourns. No montage of Alistair moments, no bitter victory.

I yelled a lot at Cassie.  Then we wrote a bunch of better endings.  Endings that still allow for the shock of having Alistair take the choice away from you, but give the moment weight, and a cut scene that shows what it means, as opposed to a throwaway line of dialog in the aftermath.  Cassie has good ideas:

1. If the game is set for Alistair to take away Jenny's choice, then there is a dialog between the characters, where Jenny thinks she's going to do it, and he lets her think that, and everything he says has a double meaning, because he knows he's about to die, but we don't.  Something like saying that he'll die with her name on her lips, and then when he's getting all explody, he turns to her and we see his mouth moving, and we know he's saying her name.

2.  After explosion, Jenny wakes up in bed, and someone is there, maybe the whole party.  Someone says that they searched the rubble, and they found something of Alistair's.  Maybe it's his sword, that Sten will carry back to the Quinari in some sort of Quinairi honor thing.  Or his warden amulet, so Jenny can wear it next to hers, like soldier dog tags. But the party is there, saying "I know what you lost."  I also really like Cassie's idea of someone saying, "they want to give you a speech, they're all outside waiting for you, but I've got a plan to sneak you out the window if you want to just leave."  And then Sad Jenny can disappear and be broody and sad because she saved the world but doesn't want to talk about it because she's SAD DAMMIT.

None of this would have bothered me so much if the romance hadn't been so good before.  It was so much better than any of the others, it swept me away.  I usually go for the same-sex romances when there's an option, but Alistair won me over.  I wasn't expecting to care.  And then the game went and made me care and then said HA HA NEVERMIND.

I was going to put in another image of Alistair (so I could google more images, obv) and I found a fuckyeahalistair tumbler, and do you know what it has?  More Alistair dialog that happens when you travel with Wynne or Zevran in your party!  Here you go! 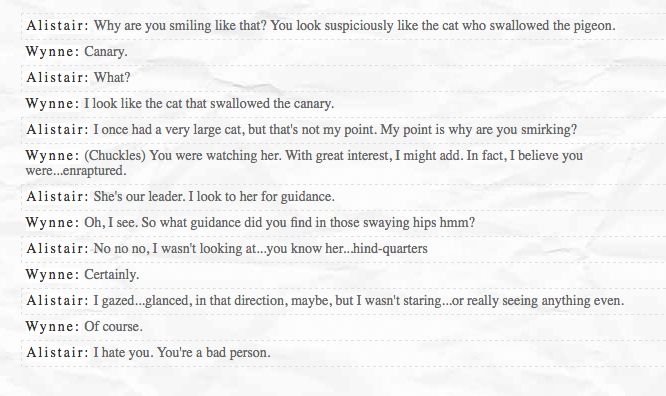 Aaaaand, of course, this: 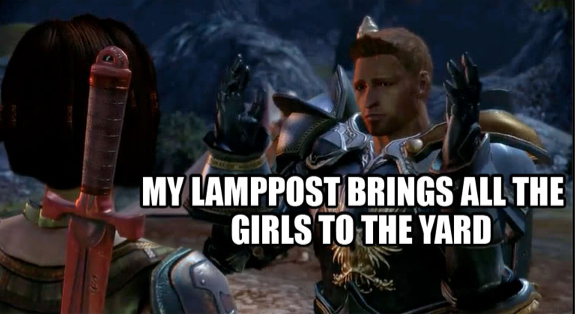