Speaking of women with power in Kirkwall: 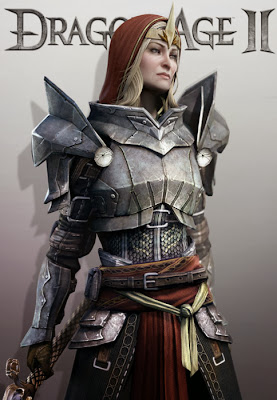 Knight-Commander Meredith is neither sexualized nor defeminized.  She wears her hair down, and long, but not curled or otherwise styled. Her armor emphasizes her figure without showing skin or resorting to the boob plate cliché.  And yet, her attractiveness as a woman is no part of her power.   It is secondary to her role as Knight-Commander.  She never references her position as a (presumably) available woman, nor does anyone else ever remark on her gender or attractiveness.   It's the Knight Commander, she'd have their head in a second!

She is never referred to as shrill, or bitchy, or any of the standard adjectives for a woman in power. And she is sympathetic. Her zealotry comes from a desire to protect her city, and she has good reasons for her fears. She is trying to contain an explosion in slow motion, and she's doing it wrong but she doesn't know any other way.
at 1:00 PM