Anders is dead again.  It's for real this time; I watched him die.  I stabbed him in the back while he waited, eyes closed.  Apostate Jenny is becoming the Jenny of Sad Consequences.

I didn't want this.  I was annoyed at him, sure.  And when I saw what he'd done, I was angry at him.  But I still didn't want him to die.  I wanted him to be better than he was.  I kept waiting and hoping.  I believed in his cause.  Jenny is an apostate, for fuck's sake.  But she isn't a terrorist.

It's Merrill, all over again.  There have been warnings from the beginning.  But I wanted to believe otherwise.  I wanted, so badly, to like him.  Even though I was failing to like him, even as I was ranting at him, yelling at him, I couldn't stop trying to think the best of him.

But if Jenny is going to have a hope of convincing people that her war is just, she has to denounce Anders.  Anything else would tell the world that she condones his actions.  And even though I don't think it will change the overall plot, even though there will be war, no matter what, I want Jenny to try to do it right.  And so Anders is dead.

Jenny tried to do everything right.  She was kind and supportive and diplomatic and none of it mattered. 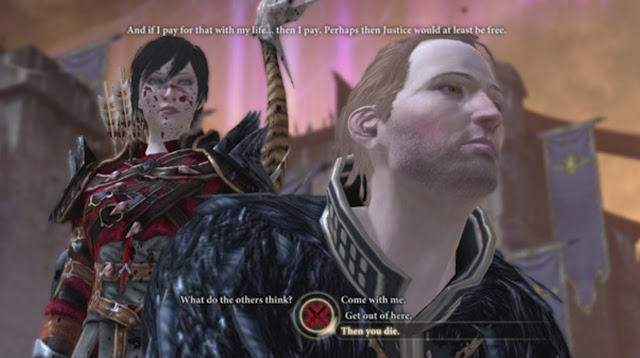