Okay, I started writing this, and would have scrapped it as the kind of over-explaning that should probably stay in my head.  But I made illustrations!  So here you go:

Now that I've played a lot more of the game, I've found that my initial impressions have changed a little.  Champion Jenny's voice has grown on me, and while I still hate the difficulty in predicting what will come out of her mouth when I pick a dialog option, at least companion reaction isn't as simple as "people like her when she's nice." Sometimes they like her more when she's angry.

The battle scenes have grown on me as well.  I agree that the enemy respawning does make some of the tactics from DA:O unusable in DA2.  Placing mages and archers at a distance from the melee can be disastrous when a group of enemies respawns immediately behind them.  But that doesn't mean I can't make tactical decisions and plans, it means making different tactical decisions and plans.  It means balancing the need to keep weaker party members out of the enemy's melee range with the need for those same party members to be within defending distance if they're ambushed from behind.  Much of the tactics in DA2 involve risk management.  If both Jenny and Anders throw Telekinetic Prison on the biggest enemy in the room, then they might be screwed when more big enemies show up later.  So, when the battle looks like this: 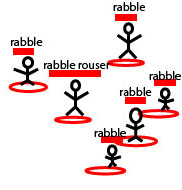 Then hitting that rabble rouser with everything I've got might not be a good idea.  There might be more coming later.  On the other hand, it's possible to be over-cautious and conserve more spells than is really necessary.  Maybe the next rabble rouser won't show up until Telekinetic Prison is ready to go again.  I can't make decisions based on planning out the battle from start to finish, I have to make decisions that will be flexible, that can account for an unknown enemy.  But when the battle looks like this: 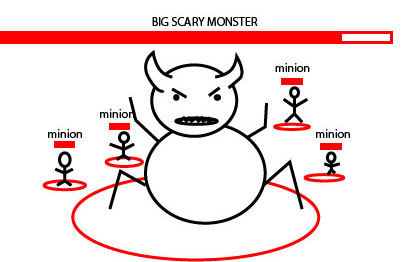 I can safely assume that, while those minions will certainly respawn, there is only one BIG SCARY MONSTER, and I can plan accordingly.

And I still think that Jenny's wiggle-run is silly, but it's still better than the floating heads attached to Jenny Shepard's butt in ME2.  (The UI had portraits of party members in the lower middle of the screen, which happened to be exactly where Jenny's butt was most of the time.)
at 12:55 PM