Getting it fact-checked. Getting kind of real. 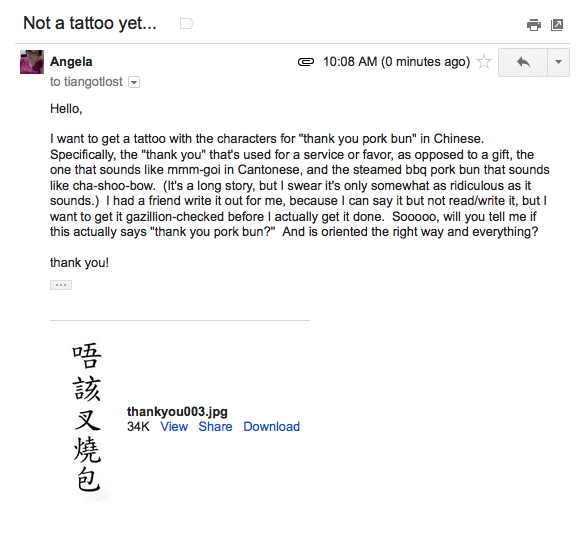 My aunt confirms "pork bun," but she says her Chinese is too rusty and she can't make out the first two.  So I sent it to Hanzi Smatter.  Which is funny because it's pretty much the opposite of what she does.  I really hope she responds.

I also sent it to a guy from Singapore that I know on Facebook.  I'm a little leery of people who aren't from Hong Kong, in case there are any local variations, but more data is good data.  I figure I can also ask one of the metals faculty, who is from Hong Kong, although his Chinese might be as rusty as my aunt's.  Oh, and could go to the "Chinese Corner," social practice group.  There's a meeting in February.  (I feel a little special-snowflake emailing a faculty/grad out of the blue and asking for translating assistance.)

It's not that I don't trust the guy who wrote it for me, but this whole getting a tattoo I can't read thing is super serious scary.  How the fuck do normal people do this?  And why?

ETA: Singapore Facebook Friend can't read the first two characters either, but confirms pork bun.  Sooooo glad I'm asking!  I asked him if he'd be willing to write it out for me, and I'll take that around as well...

ETA2: Good news!  Interesting news!  I asked the metals faculty, and he confirms that this is pronounced "mmm goi cha shoo bow."  He also says that "mmm goi," means "thank you," when someone does something for you, BUT if part of the phrase "mmm goi cha shoo bow," would mean "please" as in "please bring me a pork bun."  Sort of like, "pork bun, thanks!" which makes it also, sort of, a dim sum order.  I'm guessing that the top didn't translate right for Facebook Friend because it's specifically a Hong Kong phrase, but I'm surprised at my aunt not recognizing it.  Hmmmm.  I'd still like to hear from Hanzi Smatter.

This is very exciting.