(I'm making myself play through Awakenings, because I want a world where the Architect gets a chance to make a difference.  But it doesn't really have much appeal to me on a second play.  I want to get back to Zevran's Jenny (I kept trying to name her something else, but this is what stuck in my head), or start on a new Rogue Jenny in DA2.) 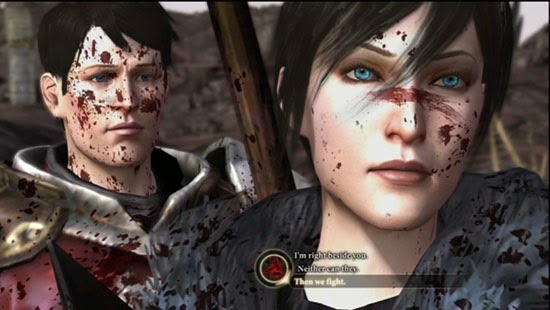 I tried to be friends with everyone in DA2, because I always try to be friends with everyone.  Someone once said that it couldn't be done, but fuck that. I win ALL charisma checks. Even when there isn't even a charisma stat. And, because it's a video game, I set about befriending my party members by agreeing with everyone to their face, and occasionally leaving them out of the party when I was going to do something they wouldn't like. There were times when I needed a party member's presence in a battle in order to survive it, but there were lots of decisions made in perfect safety where I could swap out party members to suit. This is how video games have taught me to make friends.

Except, in DA2, Jenny can be friends with her rivals.  The game phrases it as friendship v. rivalry, but from what I'm reading—I still need to try it—it's really two different kinds of friendship. One can be friends with someone with whom one has strong disagreements with. One can even, sometimes, pursuade such a friend to reconsider their beliefs.  And that's what those red rivalry points mean: Jenny has said something that her friend doesn't want to hear.

Everyone told me, I just didn't quite believe it. Or maybe I believed but couldn't make myself play any other way. The "get people to like me" instinct is too strong.

I joke that making someone like me in a video game involves agreeing all the time, and how that's a terrible lesson for real life. But I kind of do that in real life. I have a tendency to give people what I think they want, especially people I don't know well, and especially people who I want to like me. I'm planning on developing some rivalries in my next DA2 play, but it's so hard to make myself say antagonizing lines. When I see those red points flash on the screen, even though they don't mean "likes you less," I still feel bad for disagreeing. Because I'm really bad at disagreeing.

It's not strange that I have a hard time being direct, confrontational, contradictory.  I've mentioned before how women are taught to smooth things over.  I'm very good at it.  But it galls me to see that, not only does this mean I have difficulty negotiating, assuming authority, or standing up for myself and my beliefs in the world around me, I can't even pick the red dialog option in a damn video game.  It's just not nice.  And it kills me to not be nice.
at 5:10 PM