Look What Alec Soth Made Me Do:

I shot this last semester, while the ballroom club was rehearsing for competition.  It's been sitting in my purse, and then on my desk, and then in my purse, since October.  I finally got it developed.

I think this is worth exploring.  Perhaps enough to bring film to Minnesota.  Oh and yes, I'm signed up for a ballroom competition in Minnesota on the first weekend of March.  I am terrified.

Photographers compete by uploading images to a website and then waiting 2-3 months for a reply.  Writers compete pretty much the same way.  I have never competed in a live event.

Also, I think I need to pay that girl in white to dance in front of me all the time.  She should be dancing in front of every photo I take. 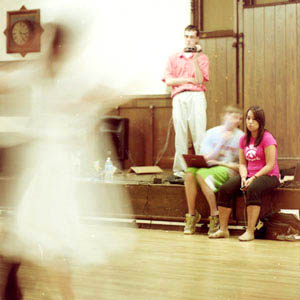 I love the way she looks like a veil over the photo.

There is obviously a lot about this that mimics the State Fair photos.  I'm still photographing the only people staying still long enough to be seen in the shot.  And those people are the ones waiting, the ones watching, the ones worrying or hoping or tired or bored.  And there is still the contrast between the moment they're in and the dancers they're surrounded by.