Still fighting to feel better.  Mostly winning.  On Saturday, when the afternoon ended with my falling to bed in tears, I told Cassidy that I didn't have the energy to keep being happy.  He asked if I had been faking it earlier, but it wasn't fake.  I wasn't using energy to look happy, I was using it to be happy.  I remember phrases and feelings, I relive the hurt.  It is easy to stay there.  It's hard to pull myself out.

At the last competition team rehearsal, when we split into leads and follows, and I still hadn't gotten an answer regarding what I would be doing, I asked the team captain.  He looked rather surprised and said, "Follow.  That's what you wanted, right?"

I said, "Yeah, I just didn't know if I would be able to, since you never told me the answer."  He was so bewildered!

After rehearsal, he handed out partner assignments.  Now, unless I am grossly misjudging my own ability (I've never actually seen myself dance), I am perfectly mediocre.  At my best, I am not as good as the finalists in my division, and at my worst, I am still better than other dancers.  I think that I might be good enough to make it to a second round, I know I'm not good enough to make it further.  But I didn't get paired with anyone who I thought might make it that far.  And so I stopped thinking about it as a competition.   No matter how I did, we would be out on the first round.  There was nothing to achieve.  It was kind of relaxing to think of it that way.

Then, over the weekend, the team captain rescinded our pairings.  And last night he announced new ones.  Instead of dancing bronze smooth with a guy who refuses to touch me, I'm dancing with the best female dancer on the team.  She is the only woman dancing at gold level.  I'm not sure how many things she knows how to lead, but even if we do nothing but a basic step for the entire 90 seconds, she is going to do it perfectly.  It means that I'm the variable.  If I'm good enough, we'll get to round two.  If I'm not, we won't.  So, not so relaxing anymore.  This is exciting.

I also had a new realization about plus-sized formal dresses.  BRIDESMAID DRESSES.  They come in zillions of colors, they come in plus sizes, usually every style is available in every size so that everyone matches.  And, really, a "bridesmaid dress," is just a solid-color semi-formal or formal dress with a different marketing scheme.

On the other hand, it's rather annoying to shop for plus sizes and see everything modeled like this: 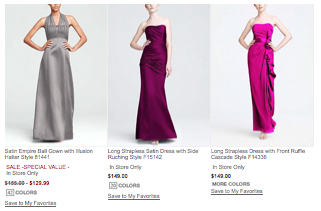 And, really, I haven't the money for a serious dress, much less the five serious dresses on my list.  And it's not like I'm going to so many competitions that I need a different dress for each one.  The USA Ballroom dances are far more casual, and there's no one to impress anyway.