I am now at the afraid-to-say-anything-to-mess-things-up stage.  We are meeting tomorrow for coffee.  I am second guessing EVERYTHING.  (So, in the last message, I mentioned being SUPER BUSY and not able to craft essay-length responses.  Which is true.  Also, what I didn't say is that I am afraid of essay length responses because I really want to meet this guy and I want him to really want to meet me, and he wants to now, but who knows anything I might say could make him change his mind.)

With that in mind, I'm kind of shocked that I only started THIS MORNING the "what will I wear" debate.  Poofy skirt, because they look the best AND show off the tattoo.  I'm thinking that I want to signal pretty much the same as for HSB, so ideally a polka dot skirt for the same reasons.  The red clashes with my pink shoes, the black is in the photo of me on OKC, so I am thinking green.  And either with the pink YOU'RE AWESOME shirt or the IOWA CITY CONVENIENTLY LOCATED shirt.  Advantage of the former is that it's in my profile photo which seems like a nice way to say "yes that's me," also, is friendly and cheerful.  Downside of the former is that pink and green are a little further than I'd like on the clashy side of my color spectrum, and I'm not sure that it's the most flattering because the material is thin enough to cling in ways I'd rather it didn't.  The latter choice makes a slightly more mellow color combo, although not so much that I feel like I'm giving a false impression, and I've mentioned having Iowa pride tshirts, and is a little more substantial of a t-shirt so looks a little better I think.  If I pick the IC shirt, I will have chosen the exact same outfit twice in a row to be seen by a crush.

(For the record, since last Monday, I've gone from 188 down to 185, up to 190, and down again to 188 this morning.  The upper point of that is probably higher but I didn't start weighing again until yesterday.)

Also, I got one of the grads to print this out for me: 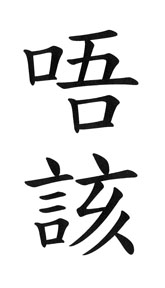 Isn't it pretty?  It's the thank you part of thank you pork bun.  Pronounced (badly) like mmmm-goy.  Rhymes with mmmmmm-boy.  I might get pork bun later today.

And once I get that part, then I could, conceivably, get the tattoo whenever I want, there is nothing stopping me, and I don't even know if I really want it.  Cassie says, would it be helpful to self-impose a moratorium, say one year and then if I still want it I can get it, which is a good idea but, oh I don't know.

Work being busy and worrisome means that all my rules go out the window, so I actually did come in wearing cutoffs yesterday, and the rest of the week I've gone with baggy tshirts and jeans (which fit the rules, but certainly aren't blog-worthy), and I'm still feeling kind of bloated and gross, despite being at a weight I would have cheered for a month ago.  I've started eating a bigger breakfast and a GIANT cup of coffee which means that I'm not actually hungry again until dinner.  This is probably bad for me.