The 'Baby it's Cold Outside' Game 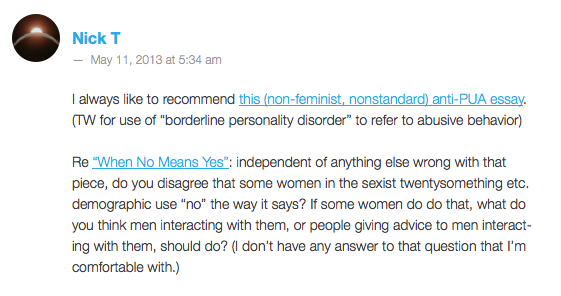 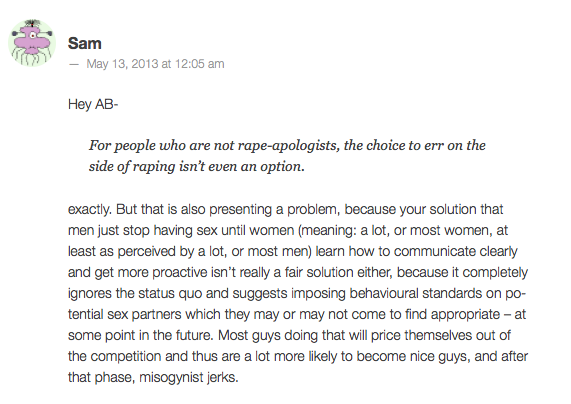 These are comments from Ozy's post about Pick Up Artists (tm).  I post these particular ones because it was the most recent time I've this sentiment, but, really, it's all over the discourse about sexual assault.  The argument goes something like this:

Some women say "no" when they mean "yes."  Because of this, it is confusing for men to know when "no" means "no" and when it means "yes."  Therefore, it is reasonable for men to treat "no" as a "yes," because it does, sometimes, mean that.  And if someone treats "no" as a "yes" when it wasn't, and commits assault, it's a reasonable misunderstanding.

The first comment just lays this out as a "problem," that the commenter cannot see a solution to.  The second comment describes the problem as either statistically common, or perceived as statistically common.  There are a great many good responses to this argument (for example on the Yes Means Yes blog here, or here).  Women who say "no" when they mean "yes," are actually not the problem, because most people have a very sophisticated ability to communicate and understand refusal, and most rapists are aware that their victim did not consent.  It's not about confusion, but apologists like to pretend that it is because it gives rapists plausible deniability.

What I am interested in, that I have not yet seen addressed, is the statistics behind that hypothetical "no means yes" woman.  Is she like the straw feminists in the closet?  (I just wanted an excuse to link that.)  Is she like the woman who makes a false rape claim to punish someone and Men's Rights Activists are so afraid of?  These people, I suppose, must exist, but in such fantastically small numbers that to make any kind of decision or policy based on them or even any consideration at all is a gross mistake.

I know that the "no means yes" woman exists.  I know that our culture encourages this behavior.  Women are taught to deny ourselves what we desire as standard practice, and we are especially taught to deny our sexual desires.  And then, women who have acknowledged our sexual desires are taught to play "hard to get" as a way to achieve them.  I know all of this.  But then, I think, have I ever done this?  Has anyone I know?  I'm sure I've read a Cosmo article telling me that I should say no even when I didn't mean it, but I don't think I've ever had enough game to actually try it.

On the other hand, I know I've played the Baby, it's Cold Outside game.  I've hemmed and hawed about staying when I really wanted to stay.  I've said "I should go," when I meant "I want you to ask me to stay."  I've felt like I should do something, but what I wanted was the opposite, and so I would try to get someone to "convince" me to do what I wanted to do.  This is in regards to lots of things, really, not just sex.  But also in regards to sex.

I would like to see a survey of women, asking if they had ever physically or verbally communicated an insincere no in a sexual situation.  How often?  If their refusal were taken at face value, what did (or what would) they do next?

The next obvious study would be asking men whether (and how often) they had ever received an insincere no, and to correlate the data to see how well (or, more likely, poorly) they matched.  That would be the thing to do in order to make change.  But I find myself just fascinated by the first hypothetical study.  I want numbers.
at 12:21 PM